The USA is known as a country for the free and the brave. But, with much freedom comes a lot of responsibility. Over the past few years, the crime rate in America is slowly rising, with violent crimes increasing as 2022 continues. That’s why you should know the 15 most dangerous cities in the United States according to the latest data.

While there can be many reasons crime increases in any country, it is crucial to be aware of which cities see the most crime potential before booking a trip— especially as a solo traveller. Read along so that you can stay safe when visiting the most beautiful states in the U.S.

How is This Determined?

According to the FBI’s Uniform Crime Reporting, there has been a minimal decline in violent crimes in the US over the past few years. While the report only goes up until 2019 for now, it still has significant information.

These figures are set up by looking at the number of incidents per 100 000 people, and as of 2019, there have been about 366.7 incidents per 100K residents in that year. Property crime is the most prevalent crime in the United States, while violent crimes and assault follow slightly behind.

Photo by AJ Colores on Unsplash

15 Most Dangerous Cities in the United States

A spike in high crime rates goes hand in hand with cities that are often highly populated but underfunded. Many cities or towns like these have high unemployment rates, increased substance abuse, and low income.

Detroit is one of Time Magazine’s World’s Greatest Places in 2022 under the Newfound Glory category. And while the city has seen great monetary success since filing for bankruptcy in 2013, it is still trying to manage its high crime rate.

Detroit is consistently ranked high on violent city lists, as its population of over 600 000 residents sees about 22 crimes per day. This means its violent crime rate is about six times the US average.

Photo by Kahari king on Unsplash

Monroe, Louisiana, is always high on any list of the most unsafe places in the US. This is because while the national crime average is 22.7 per 100 000 people, Monroe is at 95.2 incidents per 100 000 people annually.

This means you have a 5 per one-person chance of being a crime victim here.

Memphis is where rock ‘n roll was born and the blues call home. The city sits on the Mississippi river and has a population of almost 700 000. And, while its nightlife is wild, it’s best to be aware of your safety as its crime rate is one of the highest in the country.

Unlike many cities on this list, Memphis’ crime rate has been increasing as the years go on. In 2019, there were 12 367 reports of violent crimes and 39 860 reports of aggravated assaults in that year alone. In 2021, there were about 31 crimes committed per day.

Photo by Heidi Kaden on Unsplash

Not to be confused with Springfield, Illinois, this small Missouri city only has a population of 172 000. But that doesn’t stop it from receiving families hoping to visit the many museums and aquariums.

However, its crime rate stands at about 1,504 incidents per 100 000 people, with its violent crime rate being almost triple the national average. Assaults and thefts are the most prevalent in this city, but you have a one in 14 chance of being a property crime victim.

This big Midwestern town is known for its famous US landmark, the Gateway Arch, family fun and famous residents like T.S. Eliot, Josephine Baker, and Maya Angelou. The city also has a dark side for which it is more infamously known— its very high crime rate.

With a population of about 300 000 residents, it is sad to see that St Louis has a very high homeless and substance abuse issue. According to the New York Times, the city is the most dangerous USA city to live in as it has a significant problem with violent crimes. It also has the highest murder rate in the country, at about 60% in 2022.

Photo by Kawshar Ahmed on Unsplash

Albuquerque is a beautiful New Mexico city well-known for the Albuquerque International Balloon Fiesta, the desert climate and a rich history and menu list of traditional Mexican heritage.

While its crime rate has decreased a bit over recent years, that isn’t enough. It is the most populated city in New Mexico, with about 950 000 residents, allowing more crime opportunities like pick-pocketing, mugging, and scams. The average crime rate here is about 1,352 incidents per 100 000 people.

Photo by Raychel Sanner on Unsplash

Anchorage is one of the most beautiful cities in America worth visiting. It is a big city with large mountains and open spaces often reserved for skiing and snow activities in winter which draws large crowds.

So it’s a shame that it comes with its fair share of crime. It has consistently been on many lists of the most dangerous cities in the United States. Alaska has a growing problem with alcohol and domestic violence, so women travellers are often more prone to violent attacks.

Also, keep in mind that while it has big spaces, it is still a city, so stay vigilant for pickpocketing and muggings, as the robbery rate here is about 60% higher than the national average.

Photo by Wonderlane on Unsplash

Nicknamed the ‘Forest City’, this city has a great mix of urban and natural beauty to attract many visitors. Unfortunately, it consistently ranks high on dangerous cities in the US lists.

There are roughly 330 000 residents, but you have a one in 71 chance of becoming a victim of a violent offence. With high risks of pickpocketing, theft, and muggings (twice the national average) it’s safer to keep valuables out of sight and to take public transportation instead of renting a car.

Baltimore has so many amazing things it’s known for. It’s no wonder many people flock to it. The ‘Charm City’ is the home of the National Anthem, serves the best crab cakes, and has terrific marine life.

The city is also, unfortunately, well-known for its high crime rate that keeps on rising. In the first six months of 2022, the city had a record-high report of 179 homicides naming it the deadliest time in its history. Theft is also a big problem, with car break-ins making up more than half of the accounts.

Photo by Irina Sitnikova on Unsplash

You’ll find the city’s capital, Little Rock, along the Arkansas River. The state is known for its beautiful natural sights, like the only active diamond mine in the US, its beautiful lakes and hot springs.

However, many do not get to visit them as they’re aware of the high crime rate in the city. There is a high probability (about 1 in 55 chance) of being a victim of crime, with roughly an average of 9 crimes committed daily. However, the most prevalent crimes in the city are property crimes like burglary, car theft, and robbery.

Photo by Mick Haupt on Unsplash

Compared to many places in California, Stockton has a good affordability rate for the state. It is known for the Haggin Museum, Oak Grove Regional Park trails, and Stockton Arena.

However, in the past few months, crime rates have started to rise again, with gun violence at a high. You have a one in 79 chance of being a victim of a crime among a population of about 330 000 residents.

While some know Milwaukee for its amazing views of Lake Michigan and beer breweries, others know it for the dark history of serial killer Jeffrey Dahmer. Either way, this city’s high crime rate hasn’t slowed down since.

The city has a population of 580 000 residents, but you have a one in 61 chance of being a victim of a violent offence. Assaults and robberies remain high on the list, with robberies in this city being almost nine times the national average.

Photo by Wei Zeng on Unsplash

Cleveland is mainly known for its museums, music history, and Polish boy hot dogs. And while some neighbourhoods here are more dangerous than others, the city still has a high crime rate that may overshadow its good qualities.

The city often ranks as one of the riskiest cities in the states, with over 1656 incidents of crime per 100 000 residents. It stands at over 300% of the national average. Thus, your chances of being a victim of violent crimes are one in 59.

Photo by DJ Johnson on Unsplash

Oakland is on the east of San Fransico Bay, California, just a short 20-minute trip away. It is known for Lake Merritt, the Fox and Paramount theatres, and its fabulous beaches, gardens, and parks.

Unfortunately, its heightened crime could deter many visitors. The city’s poverty rate of about 15%, and you have a 1 in 77 chance of being a victim of a crime. However, if you keep an eye open for opportunists and don’t walk alone or late at night, you can still enjoy its sights.

Photo by Derick Daily on Unsplash

Saginaw often flies under the radar of cities to visit in Michigan because Detroit has so much to offer. But, this small city has a lot of agricultural and natural beauty that draws many families to visit.

Saginaw has a small population of roughly 44 000 residents, with its inhabitants slowly decreasing. As for crime, you have a one in 42 chance of being a victim of a violent crime here, with most cases falling under murder and assault.

Although Saginaw doesn’t rank as high as its state friend, Detroit, because there are so few inhabitants, your chances of being a victim of a crime are slightly higher.

What city in the US has the highest crime rate? 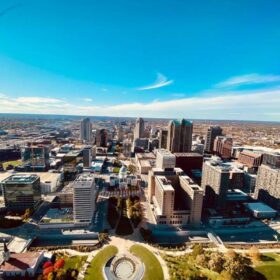 St Louis Missouri has the highest crime rate in the United States according to Worldpopulationreview.com

What is the Safest City in the United States in 2022?

Based on crime rate, Frisco, Texas is the safest city in the United States.

Which state in the United States is safest? 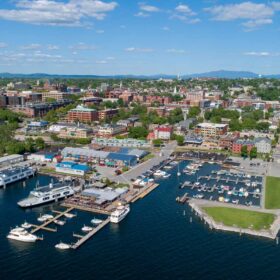 Vermont is the safest state in the United States, according to a new report from WalletHub.

Final Thoughts on the Most Dangerous Cities in the United States

The United States of America is a big country with a great mix of cultures and people from all over the world. While 15 cities of the most dangerous places in a country may seem like a lot, don’t let this list deter you from visiting any of them if you know how to stay safe.

Many countries have sites that show the good and the bad, so I tried to highlight the positive reasons why you should visit these fantastic cities. And, while it may seem scary now, knowing which places offer the best and least safety while travelling is essential to prepare yourself better.

⇒ 35 Things to do in Vegas besides gamble

⇒ 32 Most Beautiful Cities in France

⇒ 15 Most Beautiful States in the US